Northern Indian cuisine is noted for its clean, unfussy flavors, and it’s an approach you can taste in vegetarian dishes like aloo zucchini, a basic but flavorful blend of roasted and spiced vegetables, or kwāti, an earthy, starchy ajwain-scented nine-bean soup. Curry Station’s tandoori chicken is similarly un-messed-with—just marinated bird meat roasted in a 450-degree tandoor and complemented with onions.  More developed flavors are highlighted in the restaurant’s goat vindaloo. Typically blazing hot, the vindaloo here is marked as containing “med. spice,” and indeed it’s around a seven on my 10-point scale. The meat is soft and shredded, just barely clinging to the goat’s mustard-colored bones. Bonus points for putting goat on a buffet. Same for fish, normally a risky choice, given its tendency to dry out. But the fish in “med. spicy” chili sauce has stayed flaky and tender. Large cuts of green and red peppers and onion add texture and contrast. The saag paneer, meanwhile, includes big hunks of both potato and cheese in a creamy and complex spinach-based sauce, and the butter chicken is a smooth, refreshing break from the spicier goings-on elsewhere. And improving everything: Curry Station’s naan. 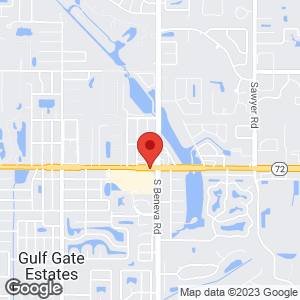 On a Lighter Note

When Chef Judi is craving Indian food, these are her favorite destinations.

Pizza, Curry, Turducken—Oh, My! Here's Where to Eat Lunch in South Sarasota

A sandwich made out of pizza dough? Delicious tacos? Sign us up.

Including craft beer and wings at JDub's, an Indian cooking class at Curry Station and more.